Ever since Minneapolis police officer Derek Chauvin killed George Floyd by kneeling on his neck on May 25, more people have been grappling with racism, both overt and systemic, in our country.  A few weeks later Sports Illustrated gathered a group of elite track & field athletes together to discuss their experiences with racism in America.

Those of us who do not live in Black skins cannot know what it is like to live in one.  Our goal in undertaking this project is to give the rest of us a window into that experience.  We hope that it will stimulate reflection and a desire to explore more about how we can all become better allies of our fellow masters athletes.  Below there are some resources for further exploration. 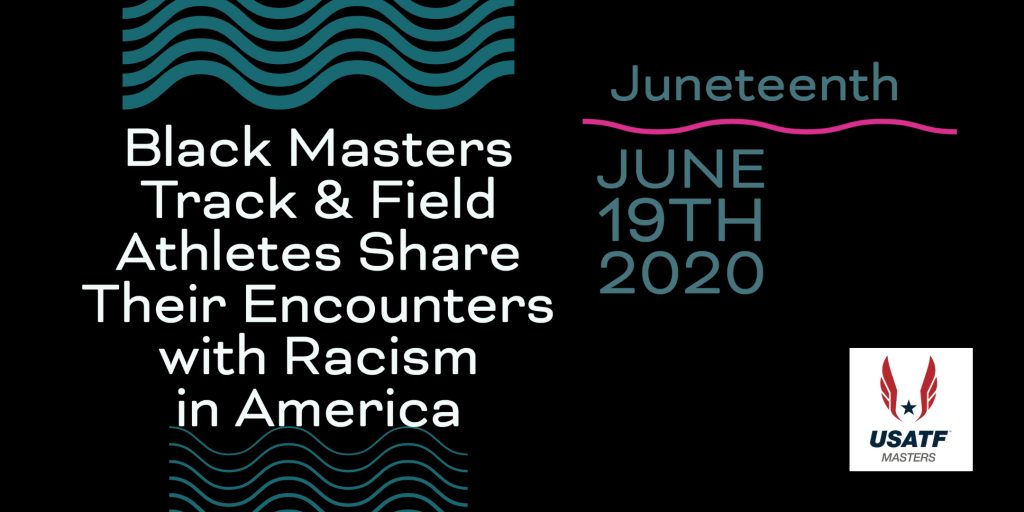 Participants in the Discussions

Easter Grant (W37) is a sprinter with three medals in WMA competition and 15 national championships.  Easter is a graduate of the University of Alabama at Huntsville and works as an information technology application developer in the Huntsville, Alabama area.

Horace Grant (M67) runs the 800m and on 4x400m and 4x800m relay teams.  He set world records in the 800m and the 4x400m and 4x800m relays in the M55 and M60 age groups and is the current American record holder in the 800m in M55 and M60. He was inducted into the USATF Masters Track & Field Hall of Fame in 2016.  A graduate of Texas A&M University, Horace lives in his native Houston, Texas, where he works for the largest non-profit social service agency on the Gulf coast as Director of Operations (IT and Facilities).

Brenda Steele Matthews (W70) is a sprinter and hurdler with nine WMA medals (including two golds) and 52 national championships.  She ran on four American record setting relay teams and was 2015 USATF Masters Athlete of the Year.  She is a USATF Certified Level 2 Sprints/Hurdles/Relays coach who has been coaching at the local high school for the past three years. Brenda holds an MBA degree from the University of Phoenix and is a retired project manager living in southern California.

Myrle Mensey (W71) is a thrower who has won 17 WMA medals and numerous national championships.  She has set seven world records and ten American records. Myrle was the 2013 USATF Masters Overall Female Athlete of the Year and winner of the Tom Gage Award as Masters Thrower of the Year that same year.  She is a World Athletics Level 5 Throws Coach, USATF Certified Level 3 Throws Coach / Trainer, and also a Certified Level 2 Jumps / Youth Specialization.  Myrle was inducted into the USATF Masters Track & Field Hall of Fame in 2014.  She lives in St. Louis, Missouri, where she is the Executive Director of the Throwing and Growing Foundation that works with students in inner city St. Louis, providing coaching in sports and life skills as well as training in dance and music to predominantly minority children.

John Porter, Jr. (M41) is a thrower who has won several national titles and medaled repeatedly in national championship meets.  He lives in his native Ellicott City, Maryland, where he is a coach and personal trainer.

Donna Barrett (W63) is a thrower, master level official, and event organizer.  She has won multiple national championship medals in the throws and organizes an annual series of indoor throws competitions in the greater Washington, DC area.  Donna is a graduate of Howard University.  She lives in Upper Marlboro, Maryland, where she is a customer service manager for the indoor facility at the Prince George’s Sports and Learning Center and coaches at a local high school.

Damon Blakemore (M58) is a hurdler and combined event athlete who has won 13 WMA medals and has set three American records in the pentathlon.  Damon is a graduate of Oakland University in his native Michigan.  He currently lives in Houston, Texas, where he is the regional manager of pre-owned sales for Mercedes-Benz USA.

Perry Jenkins (M67) is a coach, master level official and starter, and a technical official.  Perry has been head coach at Erie Community College and the State University of New York at Buffalo in addition to teaching at both institutions.  He lives in Buffalo, New York.

Mark Williams (M47) is a middle distance runner who has been part of world record relay teams and won multiple WMA medals and national championships.  Mark is a graduate of Rutgers University who lives in Columbia, New Jersey, where he is a network implementation project manager for Verizon.

For those who want to delve further into these issues here are some recommendations.  There are many, many additional resources for those seeking more information about the Black experience in America, slavery, racism, and anti-racism.  This list is far from exhaustive:

13th (2016, streaming on Netflix) – a documentary exploring the “intersection of race, justice, and mass incarceration in the United States;” it is titled after the Thirteenth Amendment to the United States Constitution, adopted in 1865, which abolished slavery throughout the United States and ended involuntary servitude except as a punishment for conviction of a crime.

Just Mercy (2019, currently available on Amazon Prime Video) – tells the true story of Walter McMillian, who, with the help of young defense attorney Bryan Stevenson, appeals his murder conviction. The film is based on the memoir of the same name, written by Stevenson.

I Am Not Your Negro (2016, currently available on Amazon Prime Video) – documentary film directed by Raoul Peck, based on James Baldwin’s unfinished manuscript Remember This House.

The 1619 Project is an ongoing initiative from The New York Times Magazine that began in August 2019, the 400th anniversary of the beginning of American slavery. It aims to reframe the country’s history by placing the consequences of slavery and the contributions of black Americans at the very center of our national narrative.  Here is a link to the series: https://www.nytimes.com/interactive/2019/08/14/magazine/1619-america-slavery.html

How Did We Get Here?

163 years of The Atlantic’s writing on race and racism in America.  Includes links to articles from one of the nation’s leading intellectual publications:  https://www.theatlantic.com/education/archive/2020/06/atlantic-reader-race-and-racism-us/613057/

What is White Privilege, Really?

An exploration of what is meant by the term “white privilege” and what it means:  https://www.tolerance.org/magazine/fall-2018/what-is-white-privilege-really

White Fragility: Why It’s So Hard to Talk to White People About Racism

A listing of resources compiled by Nicole Carpenter in 2018:  https://blog.fracturedatlas.org/resources-for-white-people-to-learn-and-talk-about-race-and-racism-5b207fff4fc7

The Costs of Racism to White People,

An article by Paul Kivel:  http://paulkivel.com/wp-content/uploads/2015/07/thecostsofracism.pdf

For Our White Friends Desiring to Be Allies

An article by Courtney Ariel:  https://sojo.net/articles/our-white-friends-desiring-be-allies

Ibram X. Kendi, How to be an Anti-Racist (New York, 2019).  This book by National Book Award winner Kendi has been #1 on the New York Times best seller list for many months.

William Johnson, The Broken Heart of America (New York, 2020).  A blistering history of a city’s rise and decline, The Broken Heart of America will forever change how we think about the United States. A searing portrait of the racial dynamics that lie inescapably at the heart of our nation, told through the turbulent history of the city of St. Louis.

This site uses Akismet to reduce spam. Learn how your comment data is processed.